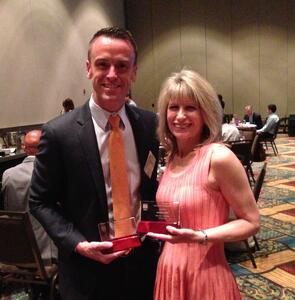 In addition, the National Investor Relations Institute (NIRI) recognized Maureen Wolff, President & Partner, with the NIRI National Volunteer of the Year Award. This award honors the NIRI member who best exemplifies the NIRI mission of advancing the practice of investor relations and the professional stature of NIRI members at the national level. At the awards ceremony, Jeff Morgan, NIRI President and Chief Executive Officer, said that Maureen “has shown true leadership skills during her tenure as a NIRI member. She has generously given a tremendous amount of her time and energy to NIRI, and is an everlasting NIRI advocate.”

Dennis Walsh, Vice President and Director of Social Media, received the 2012-2013 NIRI Individual Leadership Award for his work on the board of directors of the Boston chapter. Recipients of the leadership award were nominated by their chapter peers in recognition of their superior performance during the year.