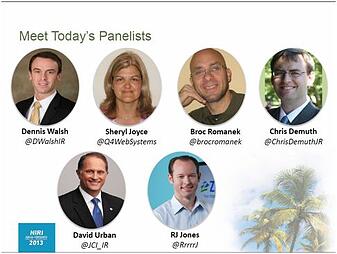 We’re often told by various studies and surveys that professional investors do not use social media. However, DeMuth, the portfolio manager, shared with the audience how his firm monitors thousands of blogs and other social media platforms for mentions of companies. He then analyzes the sentiment of the posts to develop potential investment targets. He explained how his firm finds more value in understanding what people are saying about a company versus just following traditional metrics. DeMuth also blogs about his investments and these musings attract investors who are like-minded on a particular stock. For IR professionals, this is important because activist shareholders often use this type of grassroots communications to build support in favor of dissident proposals in a proxy contest.

Zillow’s Jones also shed some light on whether the investment community uses social media. The company’s CEO is quite active on Twitter. Jones often will receive inquiries from large professional investors asking about activities that were only disclosed on the CEO’s Twitter feed. Don’t think investors are following social media? Think again.

IR professionals often struggle to determine why and how they would integrate social media into their investor outreach strategy. Urban’s company, Johnson Controls, is a relevant case study. Johnson Controls decided to participate in the paradigm shift in communications from traditional to new media. They’ve established a dedicated Twitter channel (@JCI_IR) for news that would be of interest to their existing and potential investors. The goal is to proactively engage followers, keep them informed of company updates and provide them with existing content that is repurposed from other areas of the company website, including short video clips of senior management interviews. Urban’s team even developed a response matrix so anyone in charge of the corporate social channels understands exactly how to handle inquiries that come in via Twitter, Facebook, etc.

Jones’ company, Zillow, already had an established social media presence, and given that their leadership team is social media savvy, it made sense to leverage the existing channels for investor engagement. As part of their social media strategy, the Zillow team decided to integrate social media into their recent earnings call. They used infographics shared on Twitter and Facebook to tell a visual story with metrics that explained their recent growth. Zillow also made IR and social media history by answering questions that were submitted via Twitter during the live call, including two from sell-side analysts. 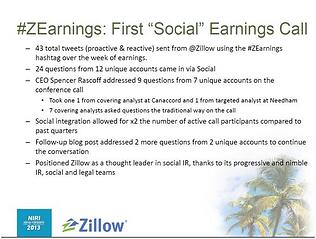 The panelists also offered tips on how to help management understand why there is value in establishing a social media presence. One strategy is to show how other industry peers successfully use social media to increase awareness or establish management as thought leaders in the space. As Q4’s Joyce pointed out, establishing a solid monitoring program is the first step to support the case. In addition, Romanek suggests bringing samples of potential blogs, tweets, updates, etc. to management and your general counsel that show how you would use social media to help them get comfortable.

The goal of the session was to encourage IR professionals to insert themselves at some level in their company’s social media strategy since many public companies have a social media presence in which IR is not involved. And since investors are looking at information shared on social media, that is a risk. IR practitioners should view social media as an opportunity to expand their company’s reach and amplify its messages to a larger audience. Start building a following now by integrating new media tools into your overall investor outreach strategy. Given the strong attendance at this workshop, I am encouraged that many IR professionals are taking the right steps to better understand social media and how they can use it to support and improve their investor relations programs.